Conceptually, this is by far the oldest of all the comics ideas I have posted, which is one reason it's the last of the series. Holly Barnes was born in 1988 while I was at work at some crummy temp job back in Jersey. I had been listening incessantly at the time to Roy Orbison's final album, Mystery Girl, and I started thinking amid my boredom that it might be a nifty name for a teenage superheroine. I may have drawn a page or two of the idea, which featured a meteor crashing into a suburban home and imbuing a young girl with superpowers, but that's as far as I got (and clearly I hadn't put much thought into the concept). I abandoned the idea and moved on to other things, and soon after lost all interest in superhero comics altogether.

By 2001 I had grown weary of trying to create angsty autobiographical twentysomething alt-comix (which I wasn't very good at in the first place), and started thinking about drawing a children's superhero comic. Superheroes had long since passed deeply into the dark 'n' gritty morass that would launch a ton of million-making summer movies, and I was in the mood for something light and fun and in the spirit of the 1960s Marvels I had loved and devoured as a child. And this time, I knew an artist firsthand who would do a much better job of drawing the comic than I: none other than of course  Dan Parent. I was thrilled when Dan said he liked the idea, and I immediately set to work drawing and writing a full origin script. Dan meanwhile designed both the look of her character and her costume, while I designed the Twillibox, the device she wore on her back that gave her all her superpowers and abilities. 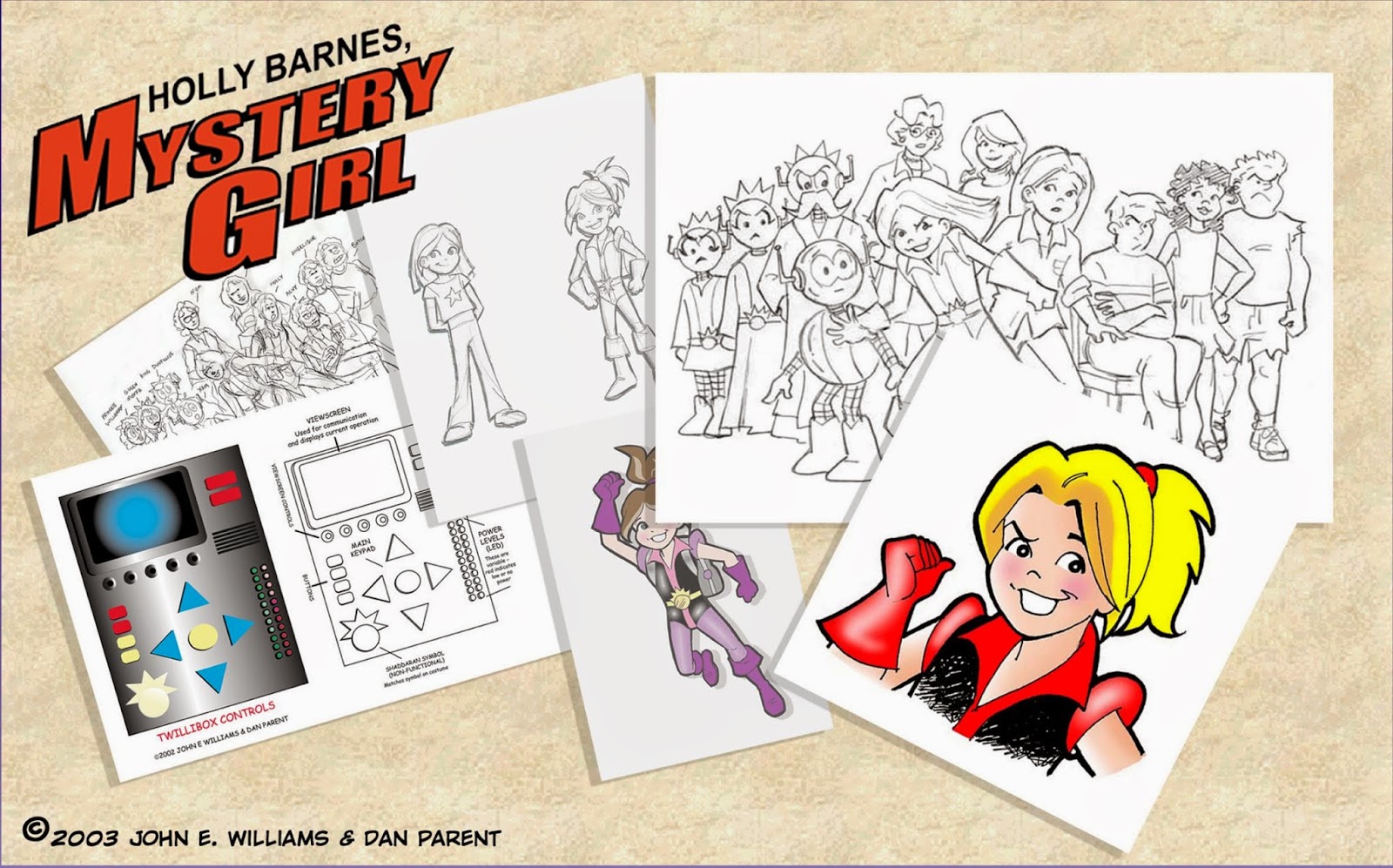 Holly is an 11 year-old girl who lives with her mother and brother in a town called Rockview, and one day Holly encounters a fugitive alien who, impressed with the brave manner in which she stood up to some bullies, offers her the chance to be trained to use the most powerful device in the universe. The alien wants to keep the device safe from its rightful owner, a spoiled and conscienceless princess on his home planet, but Holly wants to learn how to use it for good. Thus this brave, wisemouthed girl who can barely keep out of trouble teams up with the ever-worried, ever-wise and kind alien to protect the device and to do good in the service of others.

Dan drew some great sample pages, and while the art was of course wonderful I was not fond of the way he first drew Holly, which was as an adorably cute moppet. I asked Dan to give me more of "Betty Cooper as a kid", and he complied beautifully. Using his wonderful art, I designed a website, a full-color brochure, and a mess of marketing samples designed to sell Mystery Girl to publishers. I also sent the idea to Jean-Marc Lofficier, the former agent and partner of the great comics artist Moebius, aka Jean-Giraud or Gir, and Lofficier said he would be more than happy to represent us if and when we brought Holly to a publisher.

I then sent the Mystery Girl package to the comics company that had first published the Men in Black comic series upon which the film was based. I wish I had kept the rejection email. The publisher scolded me for sending him something as completely finished as Mystery Girl, since apparently he preferred to be in on the conception and creative control of the comics he published, and then in his next sentence invited us to submit to him another, less finished (and therefore less our) idea. I passed on his offer.

And that's as far as we got. Aside from hearing from real people named Holly Barnes, who had found our (now defunct) website by Googling their name (and it was fun to hear from them), this is where Mystery Girl's short story ended. Dan had to pass on working on the concept further, for the completely understandable reasons that he already had a ton of paying work to do, and drawing comics for free in order to sell a concept was not the best move for him financially. I told him I understood, and as much as it broke my heart to do so, I had to let go of the dream and move onto something else. A few of my artist friends suggested I draw the comic myself, but I never considered it seriously.

That is, until now. I have over the last year developed a comics style that works for me, and I feel up to the task of bringing Holly to life all by myself. It won't be the same as what I had conceived with Dan, but it will be a new (and from a writing standpoint, I think better) take on the project. As I post this, I am in my spare time writing an outline and script, and an artist friend is re-designing Holly's look and costume. When I'm ready to go, Mystery Girl will fly again -- hopefully into the hearts of as many readers as she can capture.

BELOW ARE samples of the work-in-progress years. First up is a sketch I did of what would have been the first page of the Mystery Girl comic, followed by Dan's finished sample version. Had the comic gone forward, this would have been our collaboration method. 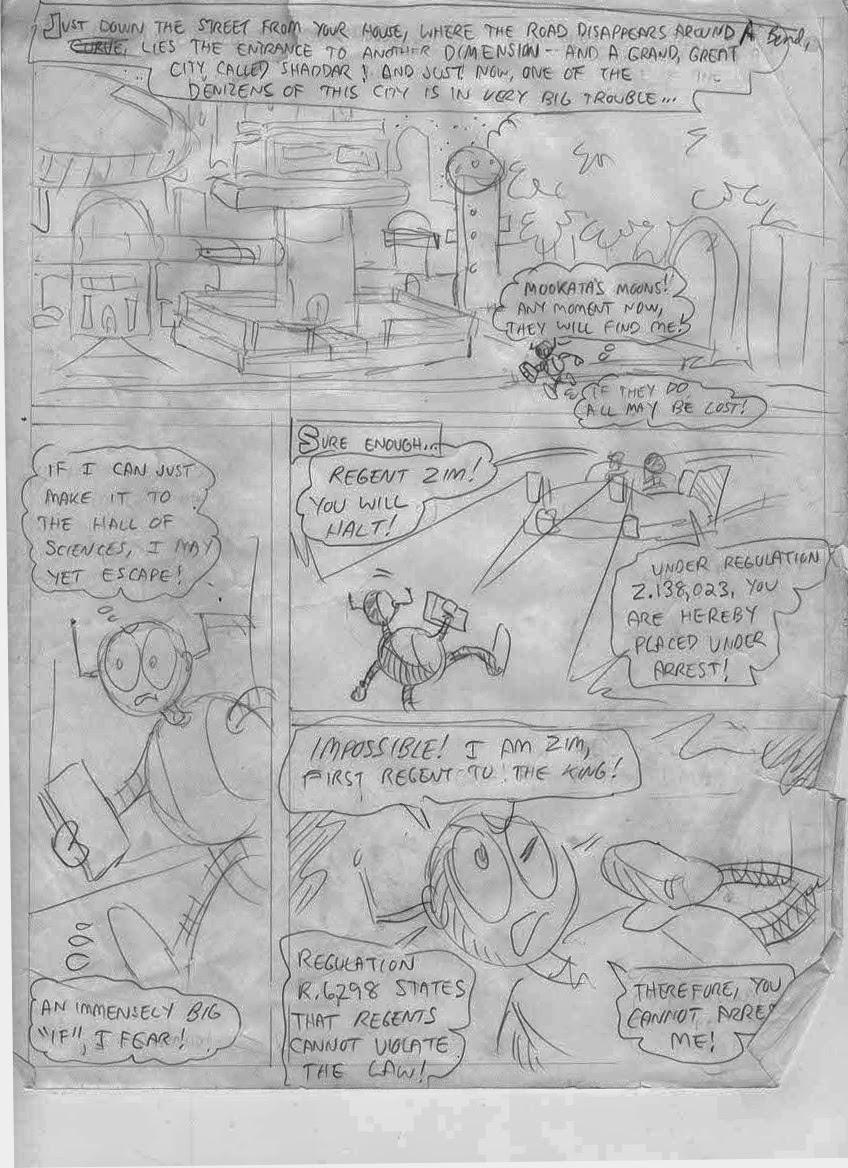 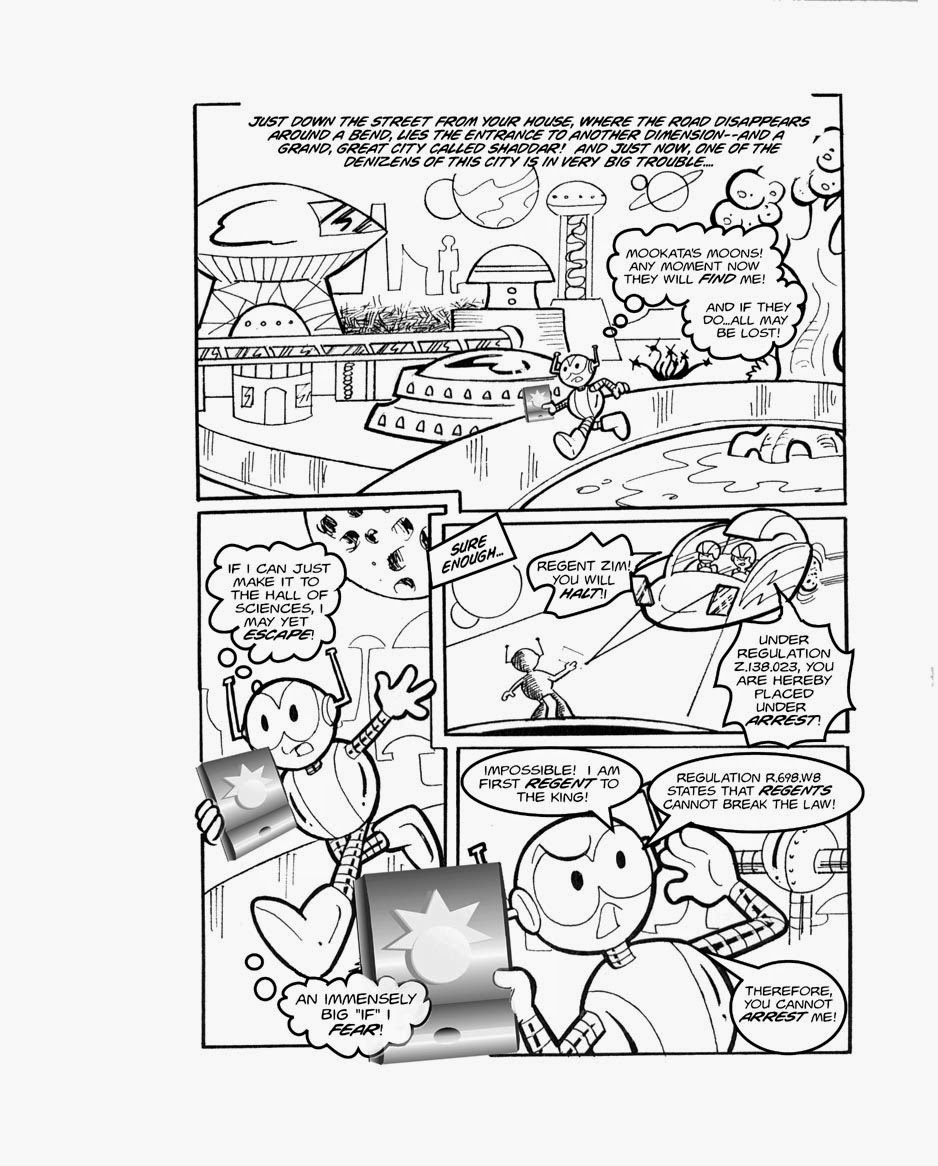 Next is a sketch page depicting a training session where Holly learns a new power, a sequence that would have been a regular feature of each issue of the comic. 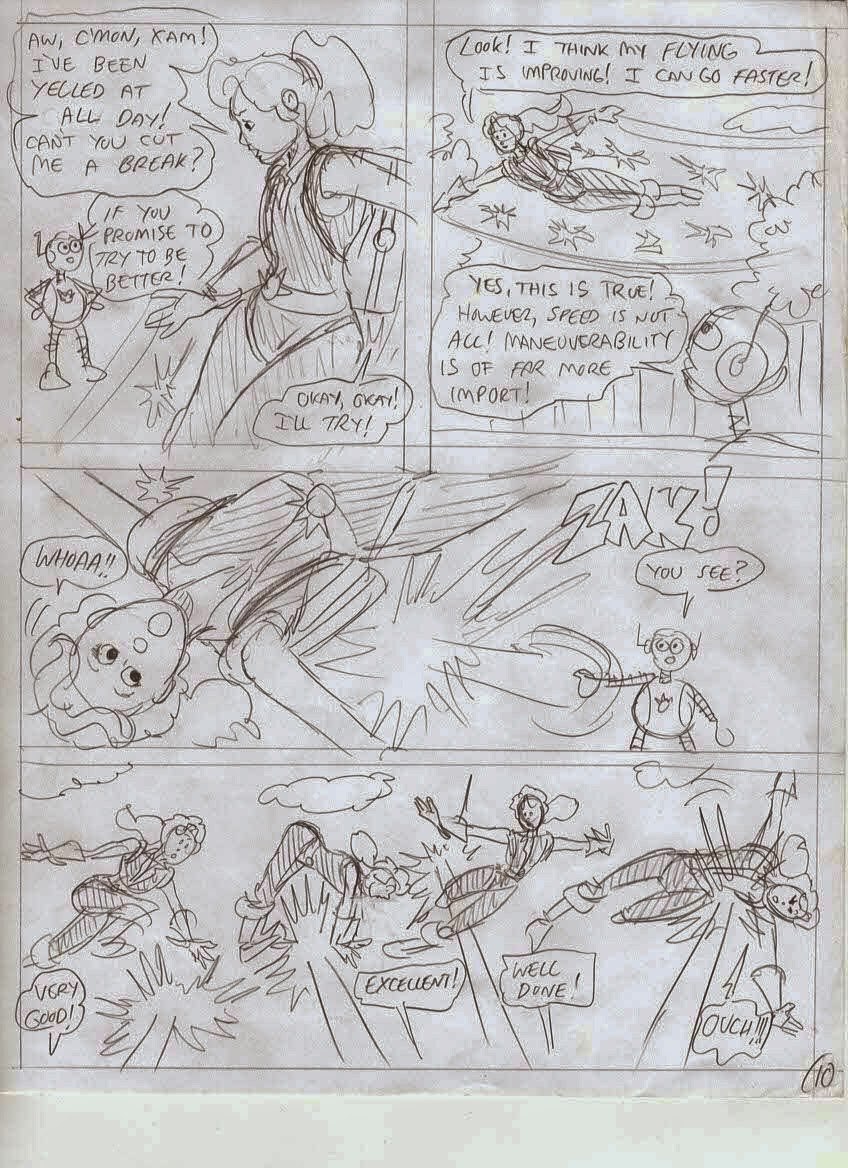 Finally, here is the entire sequence where Holly first encounters Xam (whose name was originally Zim, before the Nick cartoon aired). 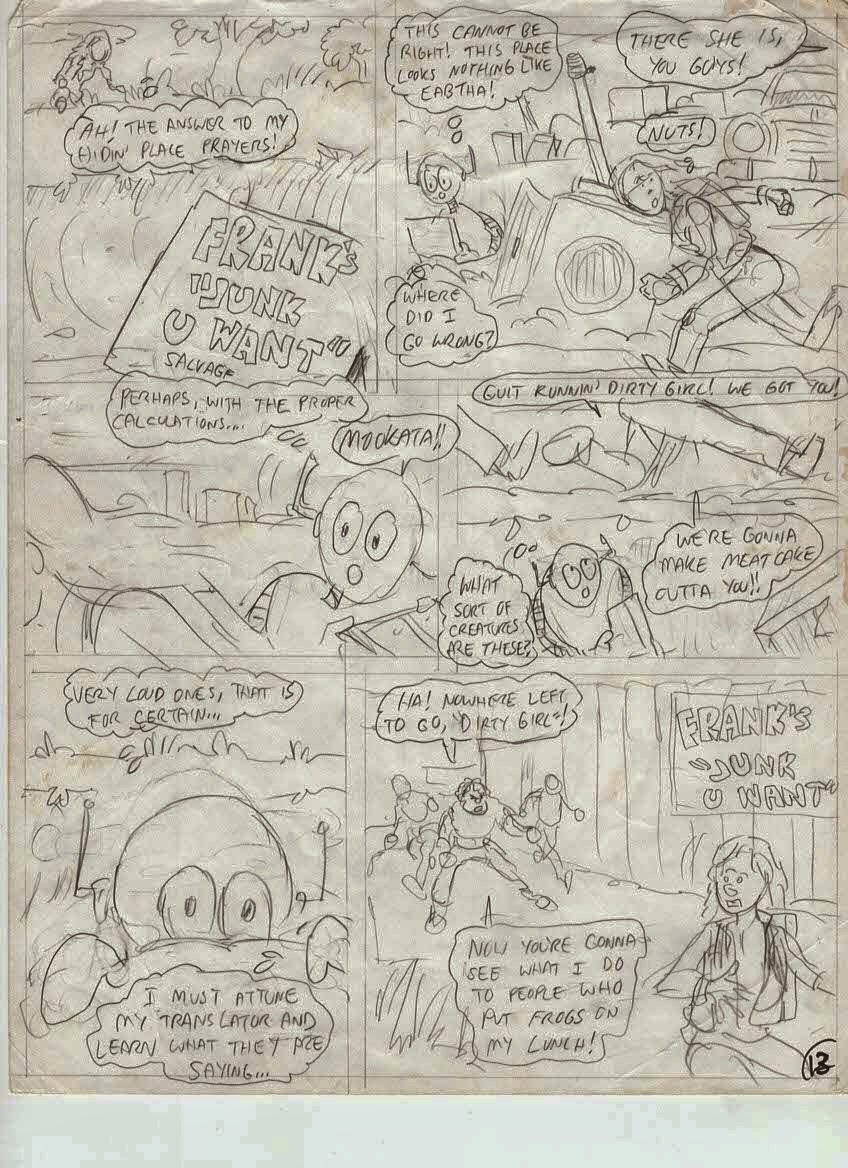 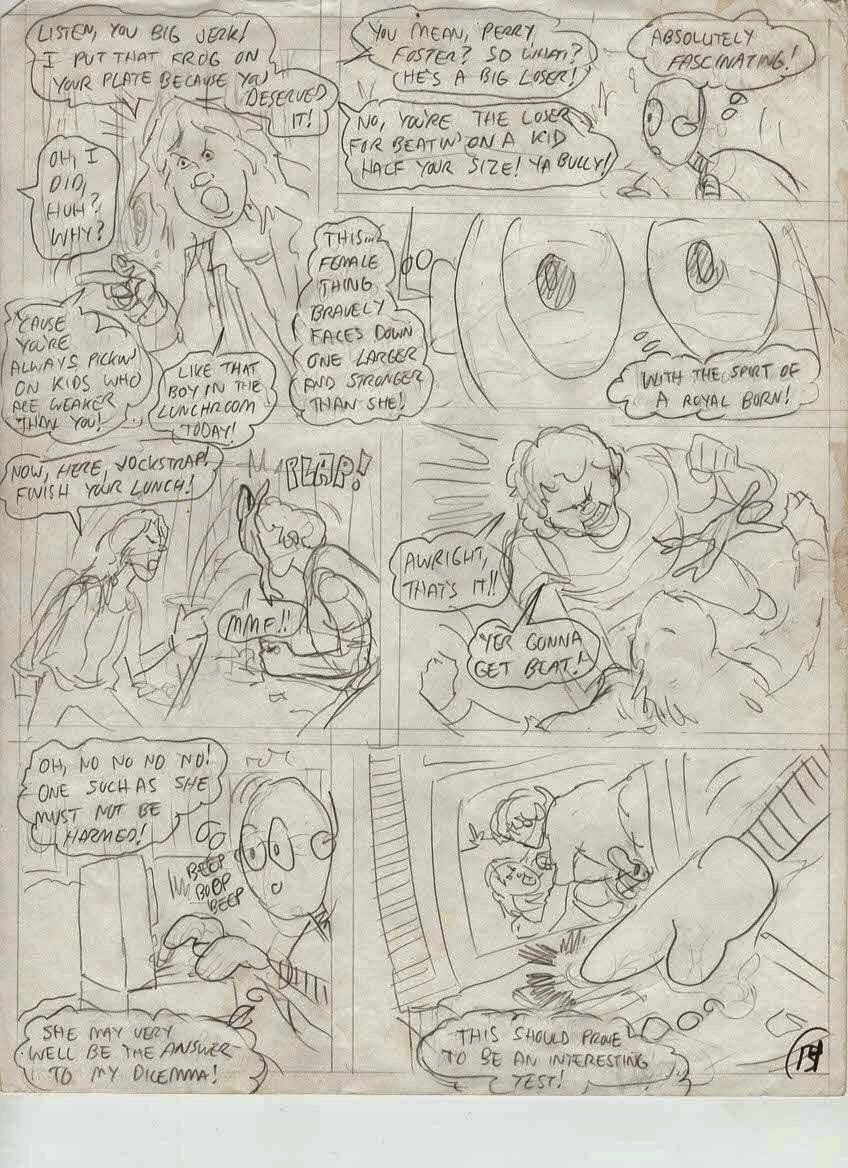 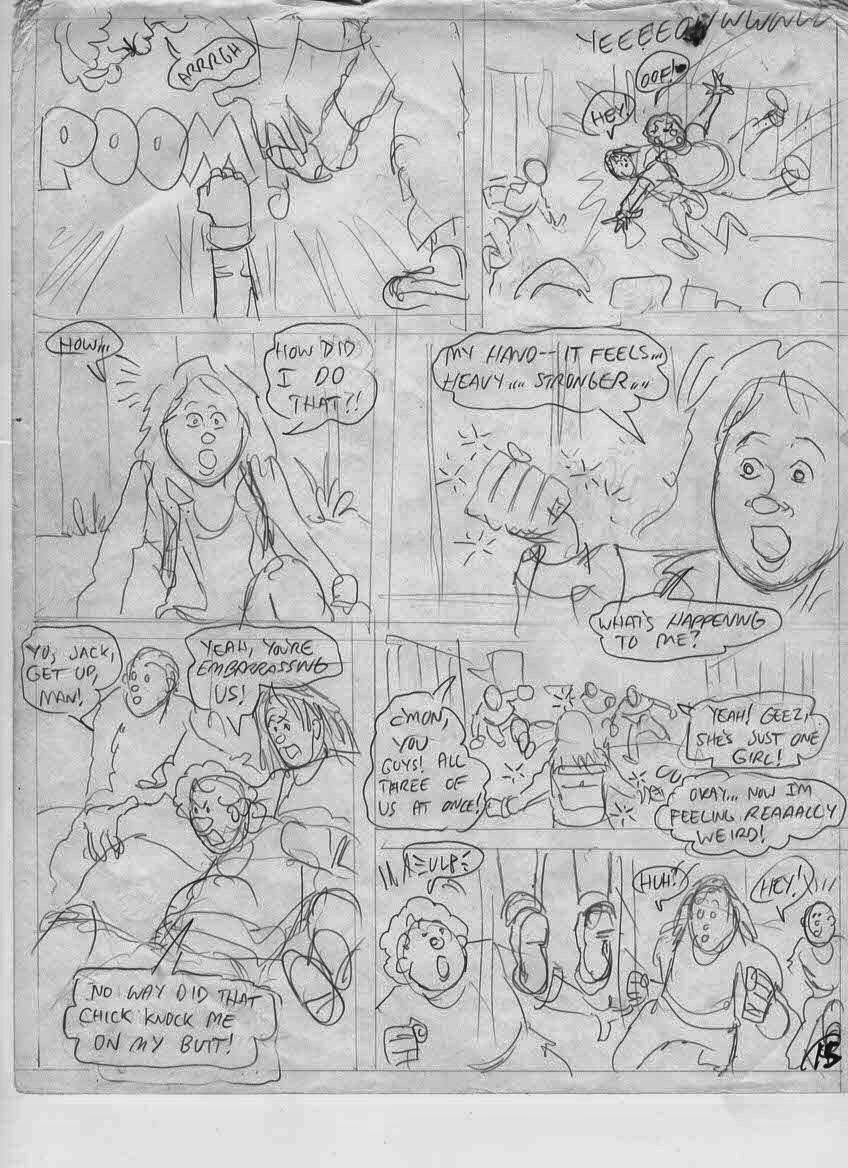 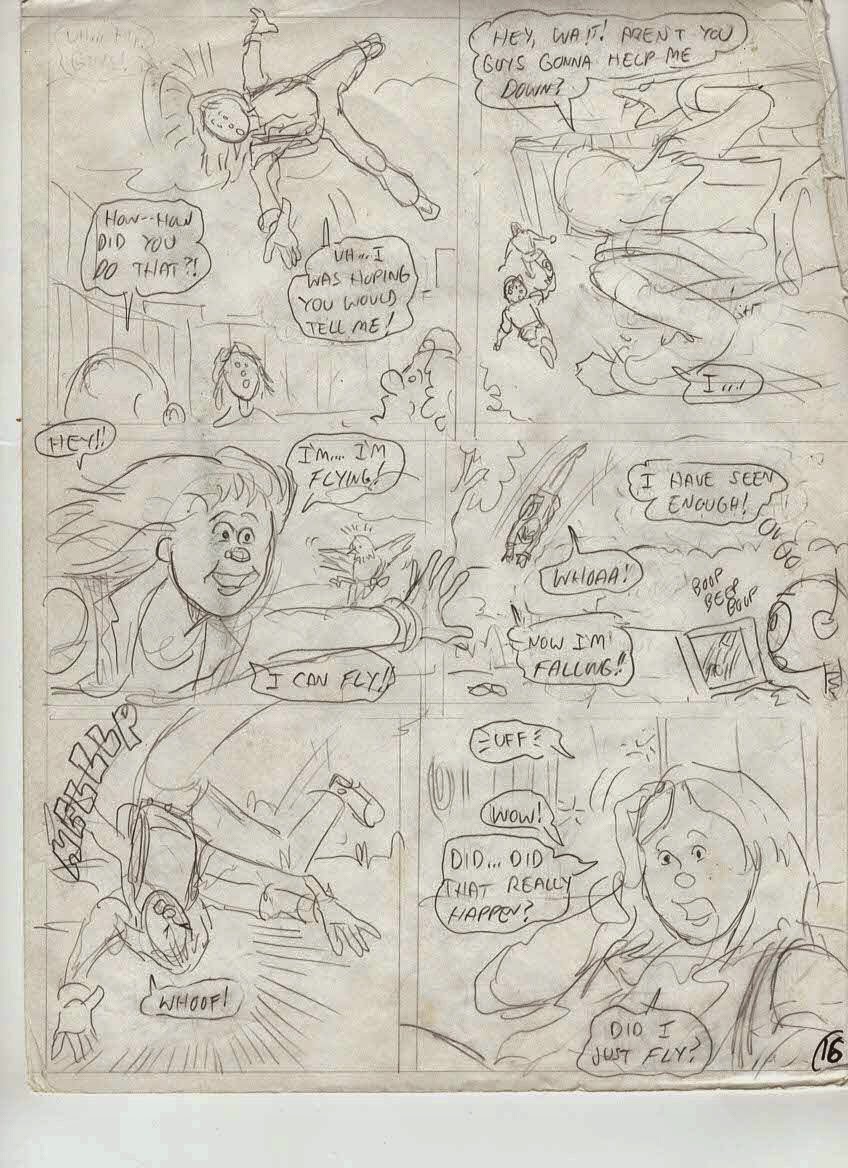 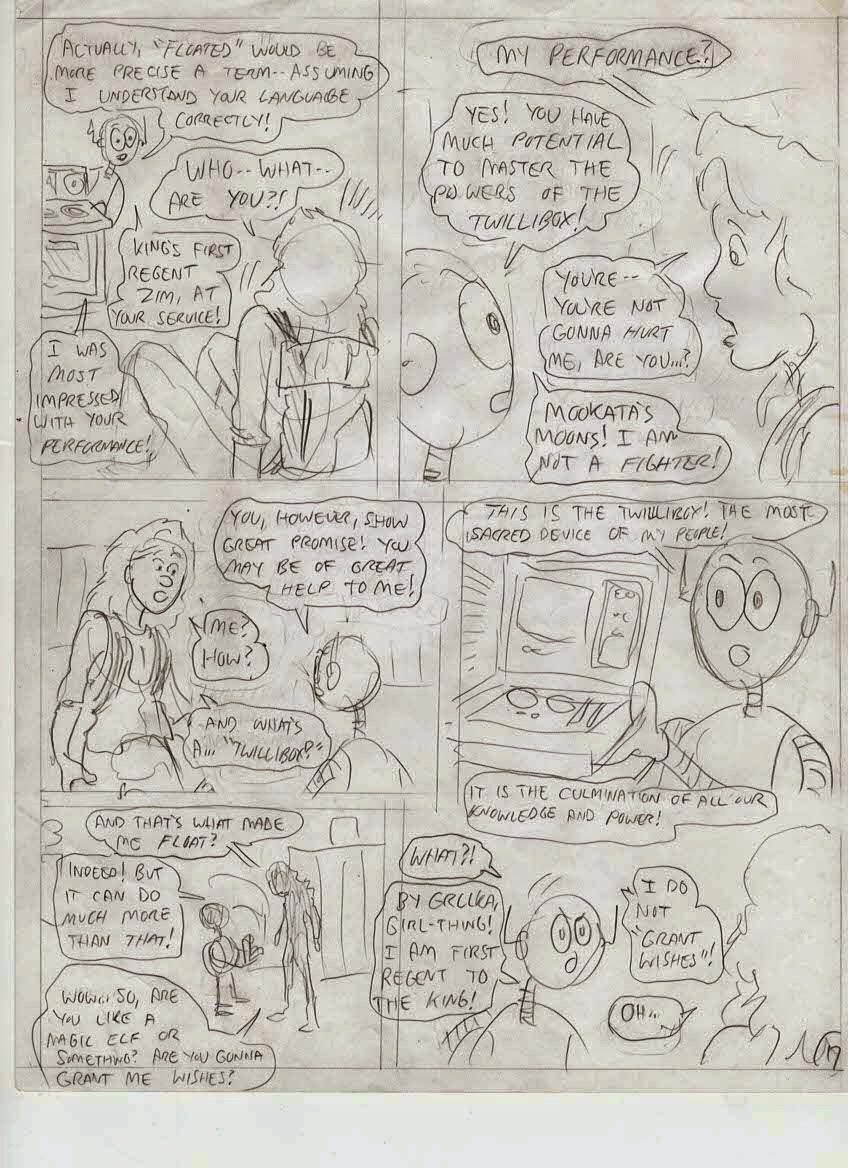