LUCY'S POST-HOLIDAY REPORT was the longest and most time-consuming comic created for this blog, which is one reason there was such a long gap between entries, and it went through several drafts and sketches before it was finished. Each page was fully inked and lettered at least twice, and the dialogue was refined throughout the process. This was a different working method than the usual scribbled-out Spiral Notebook Comics, and it's one I hope to tighten and improve as I move on to bigger projects, such as an upcoming graphic novel I've been writing.

None of this is unique to the way comics are created, and my meager, messy efforts don't take anywhere near the time and effort as those of a typical pro. But I thought you guys might be interested in seeing some of the working sketches and roughs for the comic. (click the thumbnails to enlarge) 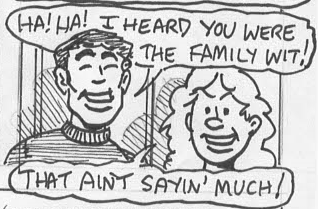 In which we meet Lucy's family and witness a domestic debacle.  Aren't you glad the holidays are over?