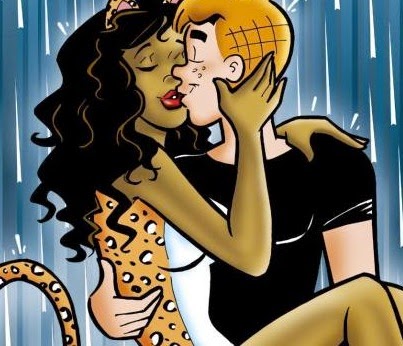 I met Dan Parent in 1985, at the start of our second year at the Joe Kubert School. My first memory of him is that his he looked exactly like Kenny Loggins. And it's true. You look at photos of him from back then with his fuzzy beard and wild hair and you half expect him to burst into a rendition of "Danger Zone". Which he often did, just to mess with our heads.


Over time I came to appreciate Dan for his other, non-hirsute qualities, chief among which was his enduring and unshakable love for whacky kitsch. Which honest to god, is putting it lightly. Years before the Internet, Dan was the curator of a museum in his head of the most astonishing collection of cheesy popular culture I had ever witnessed. There wasn't a 1970s TV movie he couldn't cite, or recite ("no babies Rogah"), not one lost, sad washed-up clown of a celebrity he didn't catalogue or adore, and indeed not a single aspect of American junk culture in which he was not deeply (and knowingly) immersed. His greatest delight was mocking the sheer tacky dumbness of awful things, but always with love and affection, and with a great roaring, funny take on the sheer absurdity of it all.

Another aspect of Dan that I eventually noticed was that he was a pretty good artist. He could draw anything, even as a student.  In class, his amazingly polished comics pages were matched only by his book cover assignments and paintings and comic strips, and his sketches of naked, pudgy artist's models were second to none. My own work was pretty much in a nosedive much of the time, but I took great delight in Dan's art, as did most everyone else who shared our classroom. (If you ever meet Dan, ask him about "Party Pie".)  I will never forget the day Joe Kubert himself stood in front of one of Dan's pages, burly arms folded, eyes discerning, and after a few moments turned to all us students and said: "One day you will all read about Dan in the news and you will say you knew him."  Now to be fair, Joe might have meant as a serial killer, but I like to think he liked Dan's work, too.

Dan spent the next twenty-seven years at Archie pounding out comics and digests and one-shots and weird, short-lived series (Jughead's Diner) and, most importantly, supplying me with plenty of industry gossip and piles of free comics. He has logged a staggering amount of years and miles on the convention circuit, written and drawn piles of comics and stories for companies other than Archie, and has developed into a spectacular craftsman and artist. Not a bad career for a kid who started out life as a Kenny Loggins lookalike. You'd think a guy would sit back and relax, maybe live out his life as a golfin' hack, like the old pros used to do. But Dan is a dervish of whirlin' proportions, and when some things shook up at Archie Comics some years back, he saw an opportunity to go beyond stories about Archie's girlfriend dilemmae.

One night during one of our marathon politics/culture/gossip phone calls, Dan let me in on a few secrets. "They're letting me do some things," he confided, and that's when I got the inside scoop on stuff like Archie dating Valerie from Josie and the Pussycats (he loved the idea that his cover art of the couple kissing would incense certain corners of the public consciousness), and the appearance of President Obama and Sarah Palin together in Riverdale. But the most stunning inside news he dropped on me was the impending introduction of an original gay character into the otherwise hermetically sealed Archie universe. I thought it was wonderful, and I knew that no matter what else happened, this move was gonna put my ol' pal Dan on the map. Not to mention supply me with even more free comics. I was right on both counts.

You can be cynical and think "oh, Dan put a gay guy in Archie just to make a big noise and make a ton of money", and if you don't think Dan Parent doesn't like to make a big noise and a ton of money, you don't know Dan Parent. But this move was a risk, and had it somehow backfired on Archie, it was Dan who would have suffered the most, in all kinds of ways. Kevin Keller was an idea Dan believed in with all his heart, and he infused the comic with sensitivity and humor and great humanity, taking some heat not just from noise-making groups like the Million Moms but from some of his colleagues in the industry as well. Which was just fine with Dan -- the things he believes in, he holds dearly and fiercely, and he delights in the telling displays of bigotry and stupidity that have followed in the wake of Kevin's creation. But even more delightful has been the positive responses, such as Dan winning a GLAAD award and the enormous love and support in general that he has received from the LGBT community. But in the midst of all this, an event occurred that threatened to dismantle and destroy forever the close friendship Dan and I had enjoyed for over 25 years.

Okay, I exaggerate. But look: the fact is that through all the years I have known Dan, and for all the beloved 60s TV he could write a book about with his eyes closed, Dan has never liked Star Trek! Which is bad enough, but for years he amused himself by making fun of me for liking Star Trek. So you can imagine my unimaginable fury when it was announced that Dan was collaborating with George Takei on an upcoming Kevin Keller comic!!!!! #mad

Yes, I'm kidding. (A little.) George Takei  is of course one of the most beloved figures on our cultural landscape, known far and wide as a lover and purveyor of kitsch and junk and wicked hilarity, so to have Dan share the helm with Sulu not only filled me with pride and fanboy excitement, it also made perfect sense. The comic they created together is warm and funny and touching without being the slightest bit preachy, which again describes Dan and George to a 'T'. I am deeply proud of my friend for a lot of things, but this is one up there at the top.

So what else can I say about Dan Parent at 50? Any 'inside' stuff? Well, he's sometimes really crabby, he likes to yell a lot when he's mad, and he likes to pick on his friends. He annoys people with his outrageous Liberal opinions, and conversely he is not someone you want annoy too early in the morning. All of which of course makes us a perfect match. He has raised two incredibly terrific children whom he loves and adores to a point that makes my heart ache, and he has been married for nearly 25 years to the equally funny and formidable Kathy Parent, whom he also loves and adores to a point that makes my heart ache. Finally: it sounds really corny, and it is, but for all his sarcasm and cynicism, he has a great, deep love for humanity and for the dignity of person, both of which he comes by honestly, and through great personal trial.

He's my friend, and I love him like crazy, and I hope he draws and laughs and yells and picks on me for another 50 years.